Police arrested the party leader who had been calling for public protests targeting France and the Charlie Hebdo satirical magazine attacked in 2015.

Police in the eastern city of Lahore on Monday arrested Saad Rizvi, the leader of an influential far-right Islamist party, to “maintain law and order,” said Ghulam Mohammad Dogar, chief of Lahore police.

Rizvi, who heads the Tehreek-e-Labaik Pakistan (TLP) party, is demanding that the government expel the French ambassador over depictions of the Muslim Prophet Muhammad published in the French satirical magazine Charlie Hebdo last year.

Rizvi called on Pakistan’s leadership to honor what he claims was a commitment made in February to expel the French envoy before April 20.

The government responded that it had only committed to discussing the matter in Parliament.

News of Rizvi’s arrest triggered protests by his supporters. Thousands of TLP activists took to the streets in cities including Lahore, Karachi and Rawalpindi. 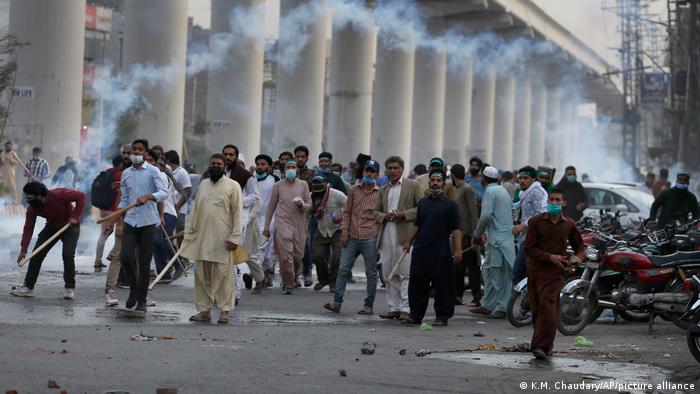 Protesters also blocked the main highway between Lahore and Islamabad, as well as some roads in the southern port city of Karachi and elsewhere throughout the country.

Why target France and Charlie Hebdo?

French satirical weekly Charlie Hebdo last year republished cartoons of the Prophet Muhammad in its edition marking the start of the trial against the surviving terrorists involved in the deadly attacks on the magazine’s offices in 2015.

It had published several such images in the years preceding the attacks, with the terrorists claiming they had chosen the target on this basis.

Although there’s no mention of the issue in the Quran, Islamic scholars broadly agree that depictions of Muhammad should be forbidden. Many Muslims find such depictions distasteful.

In Pakistan, publishing such images could be a criminal offense on charges of blasphemy, the concept of having insulted a religion or a deity, which is no longer a crime in much of the world.

Anti-France demonstrations spread throughout Pakistan last year after French President Emmanuel Macron defended the right to publish the cartoons in late October, particularly given the publication’s recent history and suffering.

Macron’s comments came shortly after a young Muslim beheaded French school teacher Samuel Paty who had shown the caricatures in a class on freedom of expression that explored the killings at Charlie Hebdo. Paty’s murder brought the issue back to the fore in France and helped lead to new draft security laws which are currently being debated in France’s parliaments.

Teacher killing: Imam slams ‘work of thugs who have nothing to do with our religion’

Rizvi’s TLP party has a history of staging demonstrations and sit-ins to pressure the government to accept its demands.

In November 2017, followers staged a 21-day protest after a reference to the sanctity of the Prophet Muhammad was removed from the text of a government form.

The following year, the party gained prominence during federal elections by campaigning on a single issue: defending the country’s controversial blasphemy laws that can allow for the death penalty for those found to have insulted Islam. 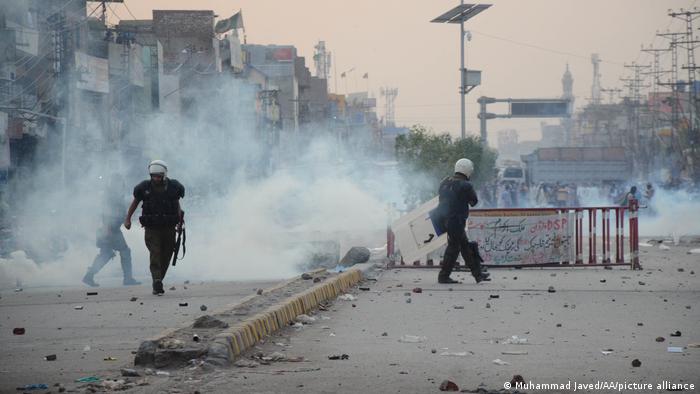 Protests continue in Pakistan as demonstrators demand the expulsion of the French ambassador and boycotts of French good.

Last November, thousands of TLP activists blocked one of the major entrances into the national capital, Islamabad in protests over the offensive cartoons, demanding the government boycott French products and expel the French ambassador.

Though the government promised to discuss the expulsion, Rizvi — who became the group’s leader after the sudden death of his father in November — on Sunday threatened more demonstrations if the French envoy was not expelled by April 20.